Make up your mind! Am I too old or too young? 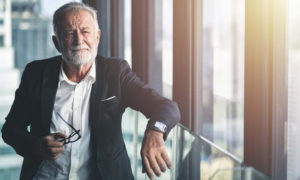 COVID-19 has magnified a lot of stress in society and relationships. For me, two of my pet hates – ageism and infantilisation – have been magnified beyond comprehension.

Three years ago, Thought Leaders founder Matt Church brought up the issue of ageism (with my permission) in a room of more than 100 people. I had just presented the details of a program I planned to launch for people who wanted to start a business. A lot of people in the room voiced their opinion that they would be happy to do business with me. Matt stated it was the people outside the room who did not know me who were the problem.

When I meet prospective clients for the first time, I deal with the issue up front. I tell them some people may think I am too old for them, and my answer is always the same: “Without the years, you can’t get the experience.”

Prior to the COVID-19 pandemic, some of the worst experiences I have had with ageism were, in fact, from people of my own generation who didn’t understand why I would continue to, as they called it, “work”. Perhaps with the unavailability of cruises, some of them may now consider going back to work.

The ageism issue has gotten worse now because of government announcements, relayed endlessly by the media, that people aged over 60 are particularly vulnerable to the virus. This is true, according to the experts. But it has led to the general population eying people of my age with the view that, “You need to stay at home or you’re going to be arrested.” This was said to me by a severely overweight attendant in a bottle shop. I was going to challenge him to a 10km run but was concerned that the thought might actually kill him.

Just because people mean well doesn’t mean that what they say is meaningful. Here are the names of some people who are still “working”, but nobody questions their ability or motivation:

You will know many others.

In a Harvard Business Review article last September, entitled “The Case for Hiring Older Workers“, a study undertaken for Deloitte of 10,000 companies showed that two-thirds of individuals aged 45 to 74 had experienced age-related discrimination. Discrimination in the workplace can be challenged through statutory bodies; I am more concerned about the occurrence of ageism in society, families and the general business environment.

Many marketers and business owners know the risks associated with labelling different generations. The Baby Boomers have a lot of disposable income and alienating them is bad for business.

Like all beliefs, we need to challenge ageist views and ask ourselves how we formed them and what evidence there is to support them.

Infantilisation, on the other hand, is about treating people like children. It’s when people are told how they should do things they’ve been doing for 60 or 70 years – basic functions of life, such as walking to the shops to buy a loaf of bread or how to boil an egg. I think the next time I feel I’m the victim of infantilisation, I will actually start carrying on like a child and throw a tantrum. Imagine doing it in the supermarket (we have all seen children throw tantrums in stores) and the attention it would get. When we label a person as something, we run the risk of them acting according to that label.

My wish is that everybody treated everybody with respect. Maybe then those younger people, who have inadvertently been practising ageism or infantilisation, might realise that if they are lucky enough, they might get to the age of the people they discriminate against.

I’d like to hear your thoughts on this. Email me at bryan@bryanworn.com.