The games people play (and not on a computer)

Psychiatrist Eric Berne’s bestselling book, Games People Play, was first published in 1964. It describes more than 100 different games people play in their personal and professional relationships. Unfortunately, the passage of time does not appear to have eliminated any of these games. 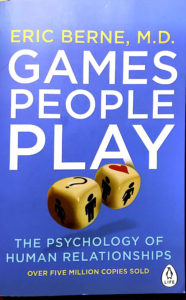 Last week, I was involved in three separate businesses with people-related issues. In the first business, the game being played was: “Why this does this always happen to me?” A manager was seriously struggling in his relationship with an employee.

In the second business, the game being played was: “If it weren’t for them …” An employee was blaming their underperformance on the business owners.

In the third case, the business was looking at hiring a particular candidate for a role with a clear position description. We held a proactive meeting to discuss the candidate. This was the longest but easiest meeting. It centred on how much energy the candidate would use in the various functions of the job and where they might struggle.

In all three meetings, the tool used to determine a clear course of action was an Extended DISC® assessment. In the first two meetings, reports were produced that compared how the people involved in each case communicated and made decisions. It was then possible to coach the people I was dealing with in how to effectively communicate with the other person and remove the conflict.

In the third meeting, the company was pleased to know the behaviour in the report was the predictable behaviour of the candidate. This enabled the company to plan how to communicate with the candidate – if hired – and what training or resources might be needed to make that person more effective in their dealings with staff and customers.

There are many psychometric assessments available for you to use. Use one to gain greater self-awareness and improve your shortcomings when dealing with other people.

I favour the Extended DISC® assessment for a couple of reasons. Firstly, it is about the amount of energy you use in your day-to-day life, particularly when dealing with other people and situations. Secondly, you can generate separate reports for different roles from one assessment. This means people do not need to continually re-take assessments, which can be costly in terms of time and money.

If you would like to discuss how psychometric testings or profiles might assist you in hiring, managing and retaining staff, I would love to hear from you. Email me at bryan@bryanworn.com.