What businesses can learn from suicide prevention barriers 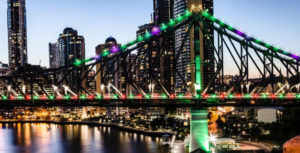 Suicides are terrible tragedies that can often be prevented by removing opportunity.

From 1975 to 2012, 130 people committed suicide by jumping off the Story Bridge in Brisbane where I live.

The decision was made to install suicide barriers on the bridge, following their success in reducing suicides on other bridges in Australia and overseas. In fact, barriers reduced the number of suicides on the West Gate Bridge in Melbourne by 85%. A similar reduction was made after barriers were installed on Brisbane’s Gateway Bridge.

Griffith University’s Suicide in Queensland 2019 Annual Report states that “means restriction” (restricting the methods of suicide) is one of the most effective ways to prevent suicide, which is why suicide barriers are installed. The report further states that there is no immediate increase in suicide by jumping from neighbouring bridges.

In his book, Talking to Strangers, Malcolm Gladwell describes how a filmmaker put a camera at each end of the Golden Gate Bridge in San Francisco, recording 22 suicides in just one year. A barrier is currently being built on that bridge, scheduled to be completed in January 2021.

The statistics are clear that a lot of suicides are opportunistic. In other words, when a person vulnerable to suicide is presented with an opportunity, they may take it – but many do not actively seek it. This is supported by the fact that many people who survive suicide attempts do not try to take their lives again.

Gladwell also details the 1963 death of poet Sylvia Plath by suicide in London. She used the coal gas oven in her flat, as many others did at the time to take their lives. But when the UK progressively switched from coal gas to natural gas, between 1963 and 1975, the number of suicides in England and Wales declined from 5,714 to 3,693. At the same time, the suicide rate continued to increase in other European countries.

The lesson from all this is that when you are trying to influence actions and performance, the environment matters. It is how we create “nudges” to either encourage or discourage certain behaviours.

Businesses can learn a lot from this principle. They can use the environment to influence employee actions in a number of ways, such as: involving occupational therapists in the design of physical workplaces to ensure people suffer minimal stress and injury; using equipment that has appropriate safety features, such as cut-off buttons; and, in a more mundane way, ensuring all processes are effective and followed.

Most people come to work every day wanting to do a good job and feel fulfilled. For the majority, money is not the motivator. If business owners and managers really want to change the performance of their team, they need to think about the environment the team is working in and the factors that may either diminish or enhance performance.

I help businesses get the most from their people. Email me at bryan@bryanworn.com.